skip to main | skip to sidebar

I didn't go into The Art Thief by Noah Charney with any sort of great expectation other than it'd be about art. And it certainly was. 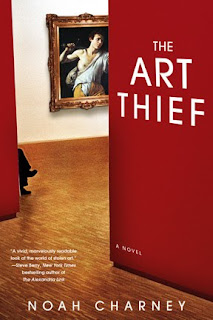 The book is about three main works of art (I think? I've already forgotten)--all of which get stolen. It is also a story FULL of characters. So many that I was lost nearly immediately. The book is also full of theft. Several pieces of art are stolen in Europe; people work separately to find the art and at the end, everything pulls together--and actually in a way that rather surprised me. Looking back, I still don't really get how it all worked but whatever.

My first bit of advice, if you're going to read this book, is to not expect to read a "novel." Think of it as more like people lecturing about art. I enjoyed learning more about art but really, this isn't a true story. Characters aren't fleshed out at all and stuff just seems to happen to further along the plot. And the ending is so sudden, with no lead up to it, that I was taken aback and almost didn't want to accept it. In my mind, the title (The Art Thief) was more about art thieves in general and not a specific person. Any ending can be believable and acceptable to the reader--if there is enough preparation. Charney failed on that front.

The reviewers on Amazon hated this book--out of 54 reviews, 26 of them are one star. Reviewers talked about ripping up the book after reading. Many mentioned laughing out loud at parts that weren't even supposed to be funny. While I don't think it was quite a one star read, it was actually pretty bad for a novel. But I did enjoy reading more about art!

I haven't been able to get into a good book all the past week. For now, I've been reading Billy Collins' Sailing Alone Around the Room. Lovely poetry in it, although I think I like the first book I read by him better. In this one, he seems a bit obsessed with death. 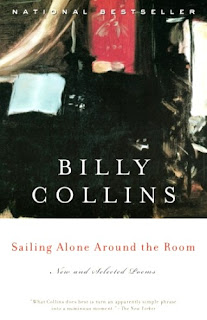 It's a gloomy, fall-ish day here in my town...just the sort of day to enjoy a poem or two. So here's two of my favorites from Sailing. "Marginalia" and "Victoria's Secret." Witty, twisty and lovely word imagery.
Posted by rachel at 6:37 PM No comments:

Well, Jon Krakauer, I already had a fear of mountains. (I'm a Midwest girl. I like flat land and water. Mountains scare me. Even the hills of Pennsylvania, where I went to college, frightened me a little bit.) But thanks to your Into Thin Air, I will never climb a mountain. EVER.

Into Thin Air is Krakauer's account of a deadly storm that hit Mt. Everest in May 1996. He barely survived but others climbing with him didn't.

Before I read this book, I never realized how dangerous climbing truly was (or how cold!). It raises interesting thoughts on what compels people to try something so deadly.

The read was intense, organized and didn't dwell too long on "afterwards." I highly recommend it.

Remembering who is the central character

A few summers ago I had an Elinor Lipman summer. I read everything she wrote (except her short stories). She just published her latest book, The Family Man, so of course I had to read it. Here's a summary from the cover copy:

"A hysterical phone call from Henry Archer's ex-wife and a familiar face in a photograph upend his well-ordered life and bring him back into contact with the child he adored, a short-term stepdaughter from a misbegotten marriage long ago. Henry is a lawyer, an old-fashioned man, gay, successful, lonely. Thalia is now 28, an actress-hopeful, estranged from her newly widowed crackpot mother -- Denise, Henry's ex. Hoping it will lead to better things for her career, Thalia agrees to pose as the girlfriend of a former child star and current horror-movie luminary who is down on his romantic luck. When Thalia and her complicated social life move into the basement of Henry's Upper West Side townhouse, she finds a champion in her long-lost father, and he finds new life -- and maybe even new love -- in the commotion."

Yep, that sums up the book. I enjoyed it, although it was almost a bit slap-happy for me. I don't remember her other books being that way....although it fit with the whole showmanship aspects of Thalia and the "horror-movie luminary."

I had trouble remembering that Henry is the central character and that Thalia wasn't the main focus. If I had, I would've been more content in her story being more of a periphery one.

Posted by rachel at 7:57 PM No comments:

Not so tasty after all

I wanted to see the movie (actually just saw it last night and Meryl Streep was amazing in it; Amy Adams' haircut was awful) and of course, wanted to read the book first. But I just couldn't force myself beyond page 50.

Powell swears up a storm--I can handle a few words sprinkled in but her usage was sooo unnecessary and constant. And she keeps on bashing Republicans constantly. I'm pretty darn non-political but I'm not a Democrat, so her continual blame on that political party got old quickly.

Probably my biggest issue is the simple fact that the book is more of a memoir about her life and not really about her cooking. I don't care about your crappy apartment, Julie, or the fact that you're not-really-ok-maybe-slightly interested in guys other than your husband. It's marketed as a food book; I want it to be about food.

Dang. Stieg Larsson knocked me over with The Girl Who Played With Fire.

The book left me in awe. Larsson tied his last book into this one and yet diverged it in a fabulous way. So good.

Lisbeth Salander ("the girl") is accused of murdering three people. Mikael Blomkvist doesn't believe she did it and starts investigating to find the truth. What actually happened--and what is being hidden--is much deeper and darker than he could know...

The pace starts out slower, with police procedural work becoming part of the story, yet Larsson manages to make it interesting and then bumps up the story to compelling. His commentary on Sweden's society is subtle yet condemning. The twists and turns in the plot were completely unexpected and surprising and made perfect sense. And Lisbeth Salander is one of the most interesting characters I've ever read about.

I dreamed about the first one and yes, dreamed about this one, too. Now I want to re-read The Girl With the Dragon Tattoo. And thank the Lord there's a third book, coming out sometime soon (I hope!).

Posted by rachel at 9:10 AM No comments:

Labels: 10, favorites, I dreamed about it, international, mystery, top reads

Years and years ago I read A Voice in the Wind by Francine Rivers. I loved it. Generally I don't care for books set in Rome, but this one was so well-done and fascinating that I actually liked it. After talking about the book with a friend, I realized I couldn't remember most of it and decided to re-read it. 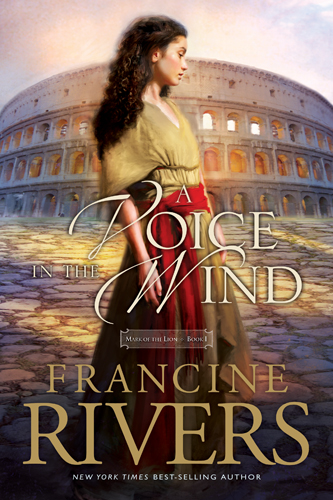 Voice is about a Jewish (and Christian) slave girl who is captured during the fall of Jerusalem and ends up a slave for a Roman family. She ends up caring deeply for the family (especially the son!) but faces dire consequences for her faith. Tied in with her story is another slave-forced-to-be-a-gladiator. Rivers weaves numerous storylines together so well--it's definitely an epic story.

Rivers is a great writer....for proof of this, my younger sister, who didn't like reading (how are we even related???), read Rivers' Redeeming Love and suddenly discovered she liked reading!

This series is from the early 1990s but it's remained in print since then--clearly people like it. It's book one in a trilogy, so I'll post reviews about books two and three in the months to come.

Posted by rachel at 5:47 PM No comments:

Another week goes by...

Last week I re-read one of my all-time favorites: The Stars for a Light, book one in the Cheney Duvall, M.D. series by Lynn Morris and Gilbert Morris. I love this series....so good. It's about a female doctor in the 1860s.

Also, thanks to Angie's recommendation, I also read Emily Gee's The Laurentine Spy. It's a nicely-done piece of fantasy work...more serious than I prefer, but still enjoyable. Go read her lovely review if you want more details about it...

My copy of The Girl Who Played With Fire came into the library today. YESSSSSSSS.

Now to finish what I'm currently reading as quickly as possible.
Posted by rachel at 6:11 PM No comments:

rachel
I'd rather be reading. :) I like most fiction and, if it's very interesting, non-fiction.